The study of the Ce inhibitor/substrate mechanism

The main goal was to determine the composition of aluminium alloy 7075-T6, initial corrosion in corrosive media and difference in the formation of the protective film in the presence of corrosion inhibitor, i. e., different cerium salts.

Microstructural characterisation (the presence of intermetallic particles in the alloy) and the study of the Ce inhibitor/substrate mechanism were performed with scanning electron microscopy/ energy-dispersive X-ray Spectroscopy (SEM/EDS).

The specimens were analysed at the same positions after various times of immersion (after 1 hour, 3 hours and 6 hours), to study the interaction of the Ce with the different intermetallic phases of the substrates as a function of immersion time. Finally, the sample cross-section and scanning transmission electron microscopy (STEM) analyses were performed to determine the thickness of the formed cerium film and its morphology. The obtained results gave a better insight into the aluminium alloy 7075-T6 composition and mechanism of corrosion inhibition/protection with cerium salts. The structure of the alloy was heterogenous, where larger intermetallic present iron and copper-rich intermetallics. On the other hand, MgZn2 nanometres particles were dispersed in the aluminium. The formation of the inhibition film on the alloy surface was highly related to the used cerium salts, where Ce(NO3)3 and especially Ce(OAc)3 form a thicker protective film on the alloy surface. The most continuous film was formed with Ce(OAc)3. The cerium film formed from Ce(OAc)3 was firstly formed on the larger intermetallic particles (cathodic area). The film was thinner and more porous on the aluminium matrix. The STEM analysis confirmed that the formed film is only few nanometres thick. 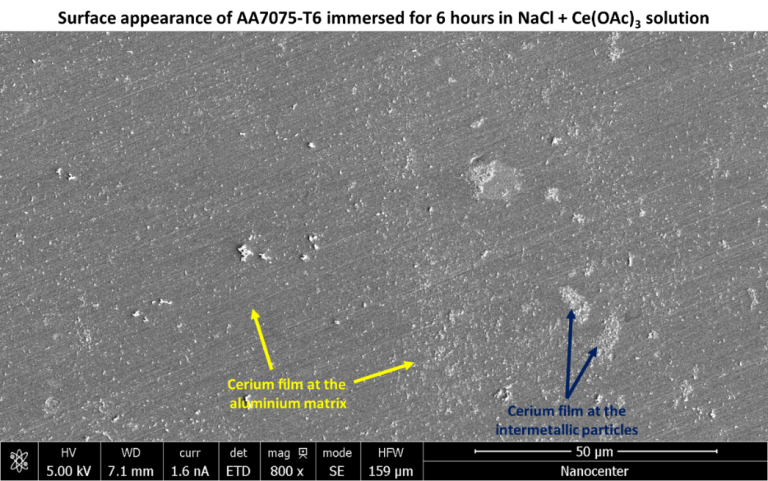